Unless explicitly stated otherwise, the Nobel Tutoring Service, the “Endless Horizons” logo, and all other site content are © nerdy.nel, 2015-2020. All rights reserved.

Although I am affiliated with various organizations, any opinions and views expressed in this site are strictly my own.

Welcome back to my ongoing NYTIP series! In my last post, I began expounding on point 2 in the three-point plan to fix the NYC Subway – extend – with SAS Phase 2X and an Astoria line extension to LaGuardia Airport. In this post, I will discuss an extension near and dear to my heart – the Concourse line extension to Co-op City.

The Concourse line opened in 1933. However, plans for its extension date back to 1929:

From Norwood – 205th Street station, the proposed extension crosses under Bronx Park and runs via Burke Ave and Boston Rd to Baychester Avenue. The Great Depression of 1929 killed both this plan and the Concourse line’s original 4-track layout; instead, the city built a 3-track line to Bedford Park with two tracks extending to Norwood and a provision for further expansion. After the New York, Westchester, and Boston (NYW&B) railway ceased service in 1937, the city planned a modified Concourse line extension via Burke Ave and the NYW&B right-of-way to Eastchester – Dyre Avenue. However, to save costs, the city connected the NYW&B to the IRT White Plains Rd line instead, forming today’s 5 train.

What would be the rationale for a Concourse line extension today? There are several justifications for it, including:

To address these issues:

Extend both the Concourse line and the 6 line to Co-op City.

NYTIP proposes a Concourse line extension via Gun Hill Rd to Co-op City. The line consists of a short tunnel segment diverging from existing tracks just east of Norwood – 205th Street station. From there, it emerges onto an elevated viaduct situated in the grassy patch around 207th Street between Webster Ave and Parkside Pl, then curves onto Gun Hill Rd. Building the vast majority of this extension as an elevated reduces the overall extension cost and avoids disturbing Bronx Park and the Bronx River with tunneling. The viaduct wouldn’t be a noisy bare-steel structure like the els of old, but a modern reinforced concrete viaduct or similar that reduces noise.

Importantly, the full Gun Hill Rd alignment covers the span from the Bronx River Pkwy to the New England Thruway (I-95) – each of which contribute to traffic woes on Gun Hill Rd:

At Co-op City, NYTIP recommends extending the 6 line to meet the Concourse line extension at Co-op City South, forming a major transfer point to the future Metro-North station. The two lines then continue northward to Bay Plaza station, situated on Co-op City Blvd between Asch and Bellamy Loops, with additional entrances on Bartow Ave. While Bay Plaza is the terminus, NYTIP contemplates a design allowing extension further north to a station in the vicinity of Carver Loop and Peartree Square: 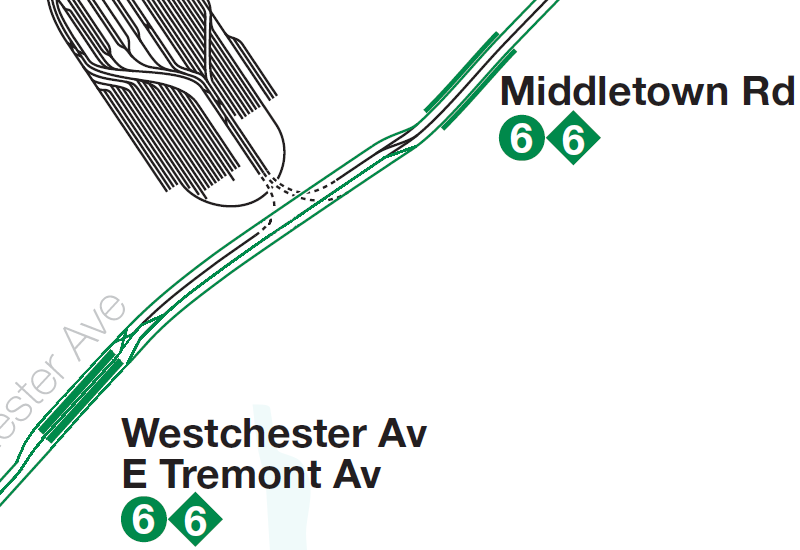 In my next post, I’ll discuss the Utica Avenue subway. Until next time!