The Nobel Tutoring Service, the “Endless Horizons” logo, and all original site content are © nerdy.nel, 2015-2021. All rights reserved.

On this edition of the NYTIP INSIDER, I explore a controversial topic – the proposed LaGuardia Airport (LGA) AirTrain. If you’ve read my SAS/LGA extension post, you know that I strongly prefer a subway extension. However, I must consider the very real possibility that Governor Cuomo gets what he wants regarding this AirTrain. If it gets built, what does that mean for NYTIP?

According to the LGA Draft EIS, the so-called preferred alternative is Alternative 9A – an AirTrain from Mets – Willets Point station on the 7 line to LGA with two airport stations. This alternative routes the LGA AirTrain over the Flushing Promenade – a curious choice of alignment, given the extant 10-lane asthmaway next to said promenade. In contrast, the JFK AirTrain mostly traverses the Van Wyck Asthmaway’s median.

I want to approach this from two angles – both of which assume LGA AirTrain gets built in some form. First, can we realize an AirTrain that maximizes transit connectivity? Second, is there still a case for extending the Astoria El if it doesn’t go to LGA?

If an LGA AirTrain must be built, then combine Alternatives 9B and 9N – respectively, the Grand Central Parkway (GCP) alignment and the connection to Astoria Boulevard station: 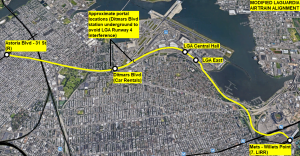 From LGA Central Hall to Willets Point, the modified alignment is the same as the preferred alternative, except it traverses the GCP instead of the Flushing Promenade. Given that airport construction is already disrupting traffic to some extent, I don’t buy traffic disruption as an excuse for rejecting the GCP alignment. West of LGA Central Hall, the extended AirTrain continues to follow the GCP to the Astoria Boulevard subway station. To avoid conflicts with LGA’s Runway 4, the AirTrain runs underground for a short distance; consequently, the Ditmars Boulevard station – which serves several car rental facilities – is underground.

This alignment would make the LGA AirTrain much more useful than the so-called “preferred alternative”.

If the LGA AirTrain gets built as shown in Figure 1, the Astoria El need not go to LGA. However, there is another corridor that warrants a subway extension – Northern Boulevard.

Here is what an Astoria El extension via Northern Boulevard could look like:

I would not want to extend the R this way, however, because the resulting line becomes too long. However, the extended Astoria line has significant potential when paired with other investments, which I will discuss in future posts.

As you can see, conceding a LaGuardia AirTrain wouldn’t derail NYTIP. However, this doesn’t mean we should concede the existing plan for said AirTrain. There is still time, given that the Final Environmental Impact Statement (FEIS) isn’t out yet, to realize something better.

For New York’s sake, I hope it’s not too late.